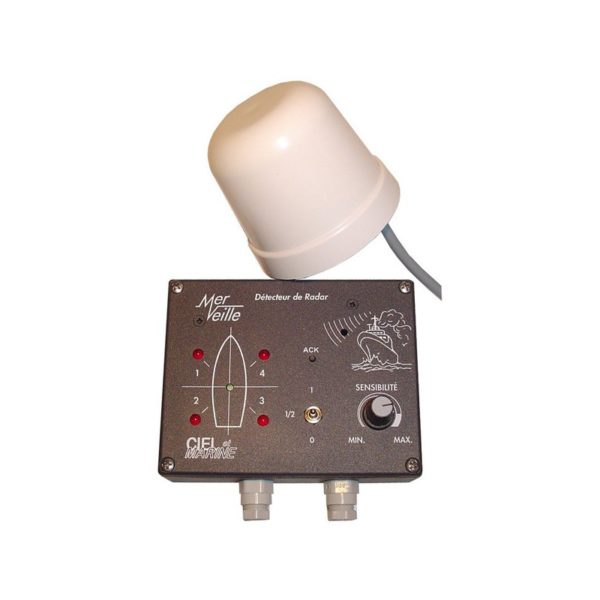 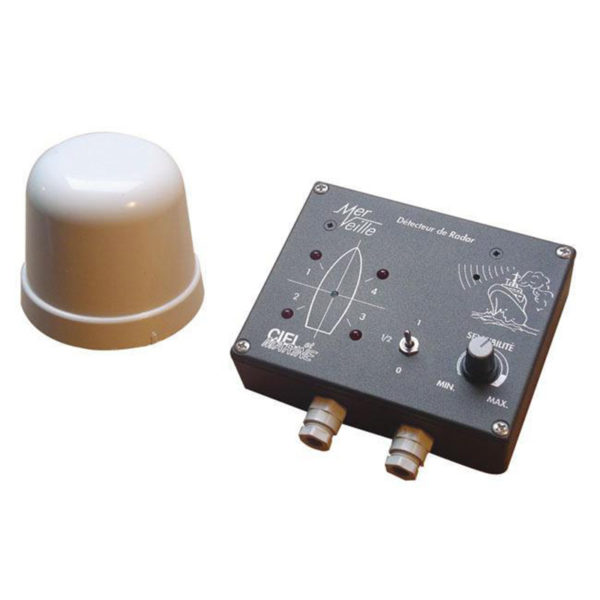 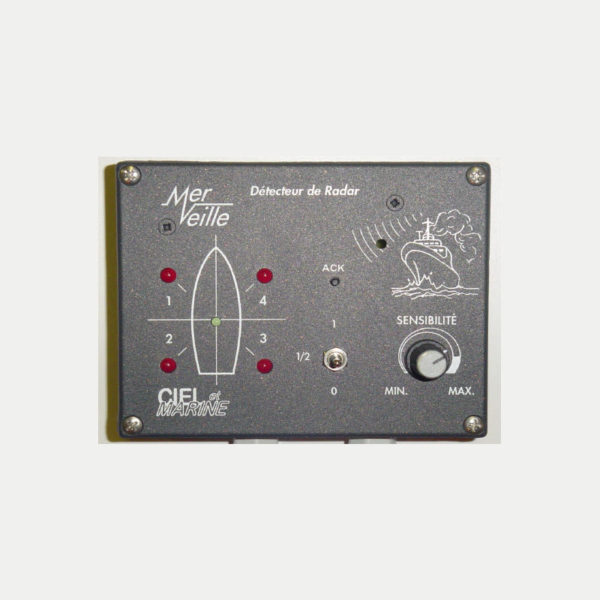 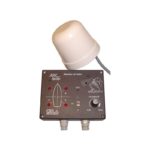 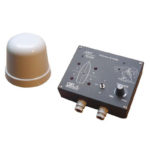 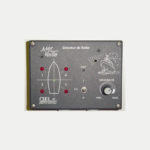 The Mer-Veille can detect any active radar nerby.

3 positions switch :
0 = Stop, MER-VEILLE is off.
1/2 = Functioning with discreet alarm. The sound alarm is only activated by the passage of a radar beam, for a short time. This position is to be used when a radar has already been detected, and the crew all know about it. With a little bit of practice, listening to the variations of the sound alarm on top will enable you to gather a fairly reliable evaluation of the situation: radar getting closer or receding away, discrimination between several radars, etc…
1 = ACTIVE WATCH. In this position, MER-VEILLE activates a “long” alarm signal to make sure all members of the crew have been warned ( and fully awakened.. ).

Reception sensor :
This button determines the receptiveness of the device, in order to appreciate the distance of detection ( up to 10 miles ). The latter depending on the power of the radar beam that has been localized, this may imply a little bit of guesswork, but it is never inferior to 1 mile.

« ACK », a multifunction button :
1/ Acknowledgment of the alarms ( brief touch on the button )
As soon as the parameters of the detected radar have been stored in the memory, the corresponding sound alarm is suspended, the LEDS lights being still activated. If the radar gets closer, or if another radar enters the field of detection, the sound alarm will be resumed. The memory may store up to 4 different radars. They are automatically erased as soon as the corresponding vessel gets beyond the field of detection. The green LED keeps on sparkling as long as a radar is retained in memory, switch being positioned in 1 / 2.
2/ Alarm clock (long pressure on the button)
The system switches to MODE PROG. ALARM CLOCK. The green light is on and steady. The red light indicates temporization values by multiples of 10’. Thus, a brief touch will add up 10’ to the temporization ( up to 60 ). When temporization reaches 20’’, the alarm-clock regulation mode disactivates automatically. The green LED indicates that the alarm-clock regulation mode is activated by means of a long sequence, followed by n short flashes representing how much time is left to run ( n =10’ ). In that way, even when lying on his berth, the sailor can see whether the alarm-clock is on, and how much time is left. Once the programmed time is completed, a permanent sound of the buzzer takes over to sollicit another manipulation: a long pressure on the button will launch the alarm-clock automatically for an identical period of time; a brief touch will bring the function to an end. Needless to say, the alarm-clock function is not meant to replace the radar detection

RECOMMENDED PROCEDURE :
In free waters, or when members of the crew are no longer operational, place MER-VEILLE on position 1, stating nominal receptiveness. As soon as the crew have all been informed by a continuous sound alarm, switch on to position 1 / 2 in order to make the sound bearable, and adjust receptivity according to the situation. The ACKnowlegment function may then be operated if you wish to suspend the sound alarm. In normal navigation circumstances, the crew being operational, experience has shown that position 1 / 2 is indeed very helpful, in order to make up for odd goings-on ( such as careless ‘opticals’, or sailors failing to keep a close watch through falling asleep or having a good time on board…) MER-VEILLE has a consumption of about 18 mA in watching mode, we advise you to use it permanently: PUT IT ON, AND FORGET ABOUT IT!

LOCALIZATION OF THE SOURCE :
Four LEDS enable you to localize the detected radar source. Each corresponds to a sector of the horizon. The LEDS arrangement scheme allows you to estimate the position and evolution of the radar. Accordingly, a suitable receptiveness level having been chosen, the passage from 1 to 2, then 3 LEDS will indicate that a boat is approaching. Please note that an overestimated level of receptiveness might “blind” the system: in that case, the 4 LEDS get lit; it is necessary to readjust. In any case, the system will prove helpful, but “classical” watching remains the rule.
In the centre of the red LEDS, there is a multifunction green indicator:
–slow flashing: detector in dormant mode, position 1.
–fast flashing: detector in dormant mode, position 1 / 2.
–steady ON: current alarm, particularly adapted to night vision of the location, or passage delayed in
Alarm-clock program mode.
–twinkling, if ACKnowlegment function is ON ( radar in memory ).
–long + n flashes, if CLOCK ON ( n*10 minutes )